An edit functionality fulfilling all demands 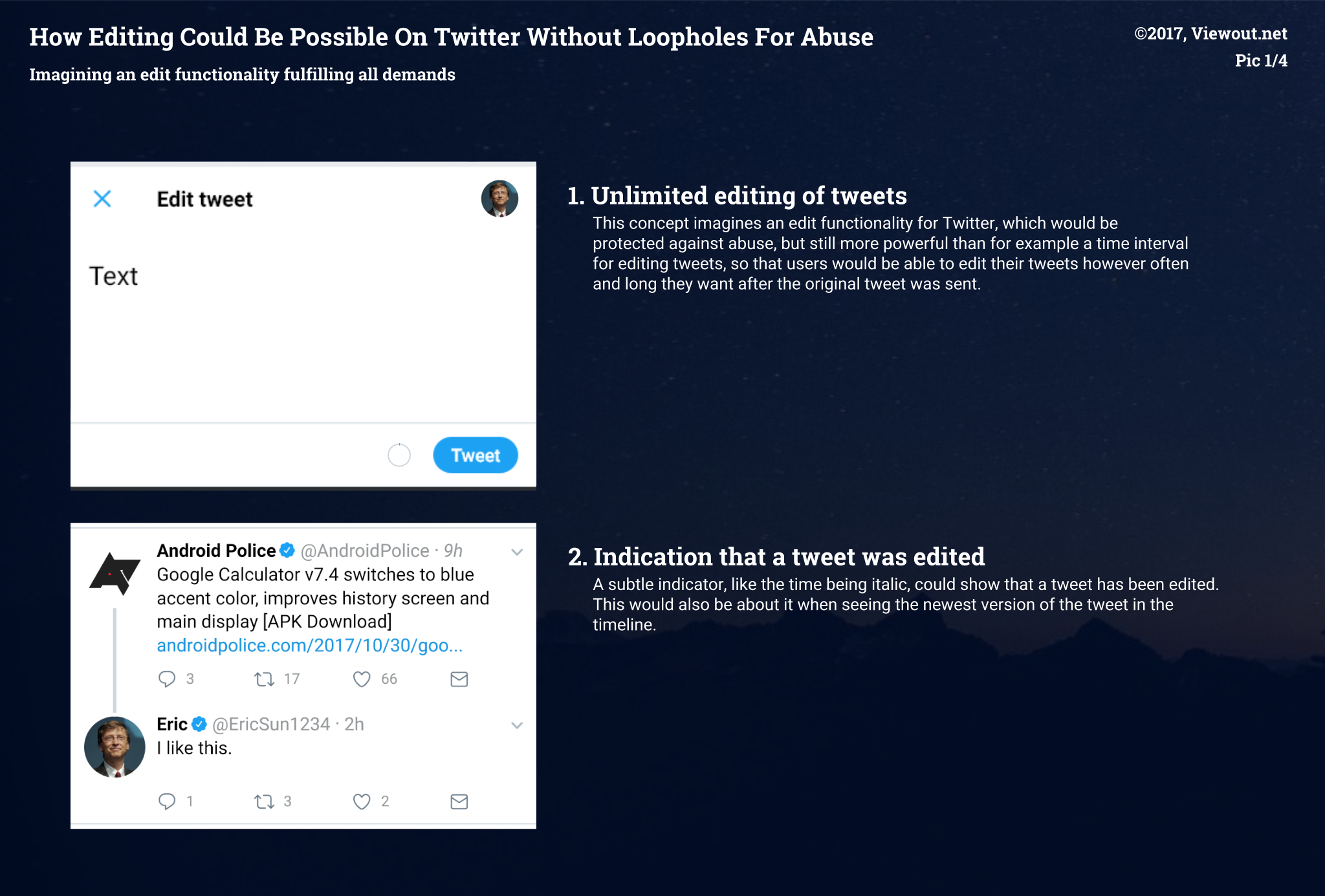 It’s been 41 days since Twitter has doubled its character limit from 140 up to 280 characters for a first handful of it’s users (and now it's available to everyone). Coming from and still regularly using Google+, where long posts have always been a key feature, I quickly was in favor of this change and have also seen many comments liking it as well.

Unsurprisingly, though, the entire span of reactions was very mixed. With from what I can tell the largest amount of the people who I follow and also the loudest ones around general discussions, like below it’s announcement, being rather negative, mocking the change and lamenting that Twitter wouldn’t understand its own social network.

But what I’ve also seen a lot in this context, probably the second largest amount of comments, were tweets from people, who were more neutral towards the new character limit and instead pointed out how they would just much rather prefer an edit functionality being introduced. Which, again, in several cases lead to replies from others explaining how this would be an even worse idea. Some of these conversations I’ve seen also were kinda constructive and came to results such as that a short time interval after sending a tweet to correct typos might be acceptable.

Coming from Google+ and seeing how editing also got through without constant and big hazards on Facebook, I really also don’t think it would be a big deal on Twitter, too, also without time limits. 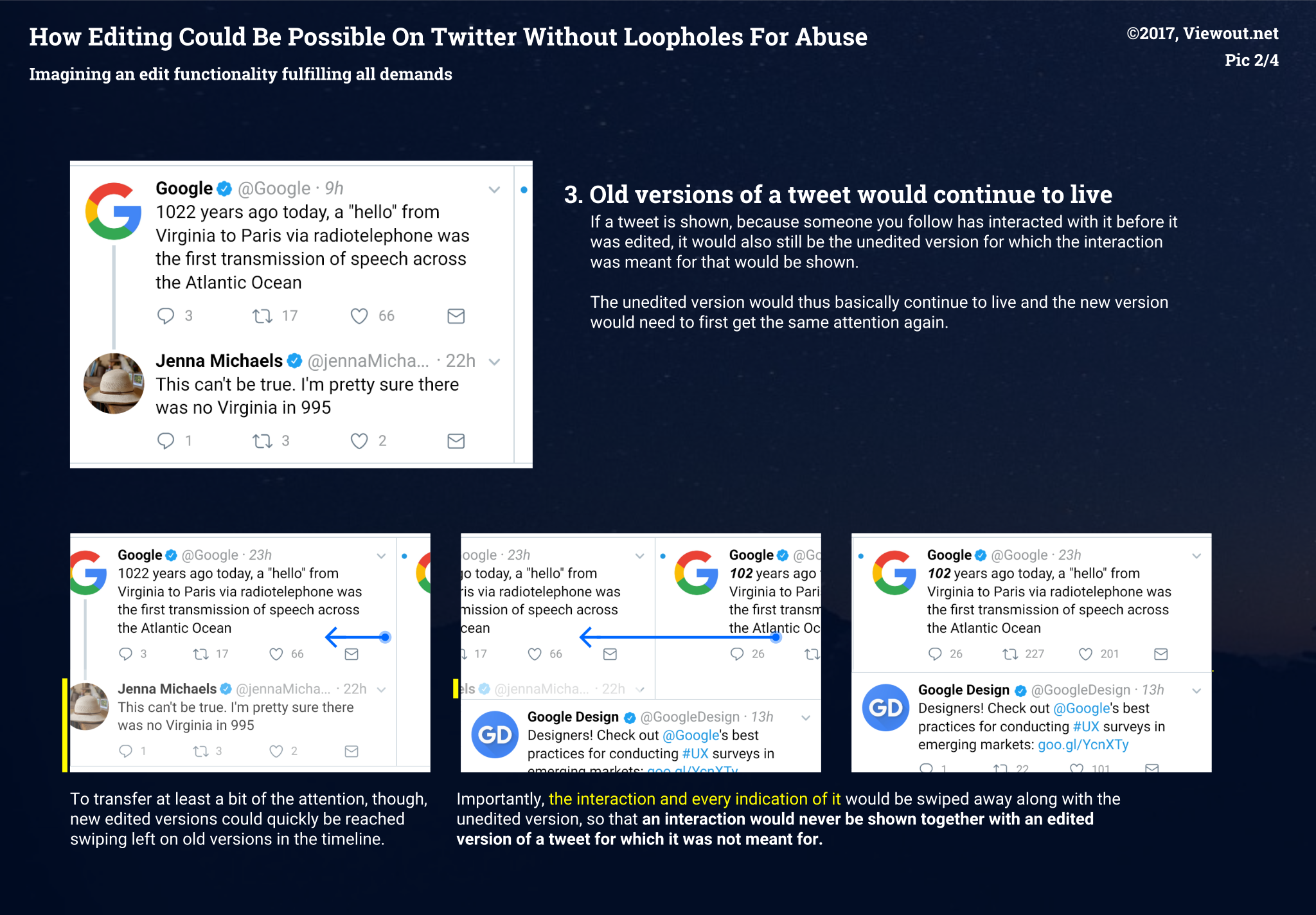 Nonetheless, I want to show with this concept an edit functionality that would even fulfill the demands of more cautious users, who believe that normal editing unlike on Google+ and Facebook would be more problematic on Twitter, while not restricting the feature in terms of time or how often tweets could be edited.

For this, I first want to give a coarse summary of how Twitter’s situation might indeed be at least a little bit different than on the other big networks. On Twitter, every reply basically also is a new and independent post itself, which means two things: First, that a reply might get a lot of attention itself beyond the tweet it was meant for (and people potentially not looking at the context of it extensively enough).

And second, that it might get a bit more conversational than elsewhere, not having the restrictions that come from only communicating publicly below the post of someone and in linear order mixed with comments from other people (even with Facebook’s two dimensions in comments). On Twitter, with replies going back and forth to clear recipients, it might be a bit more like a public messaging experience.

The main fear of the people opposing an edit functionality on Twitter then is that users could edit messages afterwards to change the meaning of conversations, put false words into people’s mouths and thus discourage users to reply to others. Especially when having more followers and thus more attention anyway. And even though it could be noticed that a tweet has been edited, many people might not understand that and could jump to conclusions too quickly.

That is why the core rule of my proposed feature is that an interaction with a tweet - a reply, like or retweet, especially stuff turning up on others timelines - should never be shown together with an edited version of the tweet for which it was not meant for.

This basically means that the old, unedited version of a tweet would continue to live, in the timelines of people who see it because others have shared it before it was edited. And the edited version would start with no interactions at first (perhaps in brackets) and would first have to get the same attention as the first one again.

One advantage of this also is that it would be a very flexible way for users to decide themselves whether it’s worth to edit a tweet or not. Because if there was a time limit, this would only benefit very active users or users with a lot of time, who would directly be pushed towards the typo or notice it in the minutes thereafter. Others who might send a tweet and then only notice a mistake hours later in the evening or even later would have no benefit.

So instead of such narrow edit limitations, the proposed edit functionality would be limitless - a user could potentially even edit a tweet a year after it was sent. But probably nobody would notice it, because everyone has shared the first version of it already and nobody would see the edited version. It would be the tweet’s authors decision whether it’s still worth editing it anyway or not. And it would be rather natural that editing a tweet shortly after it was sent would be more attractive than editing it later on, but it wouldn’t be a restriction and how it’s decided might be different for everyone. 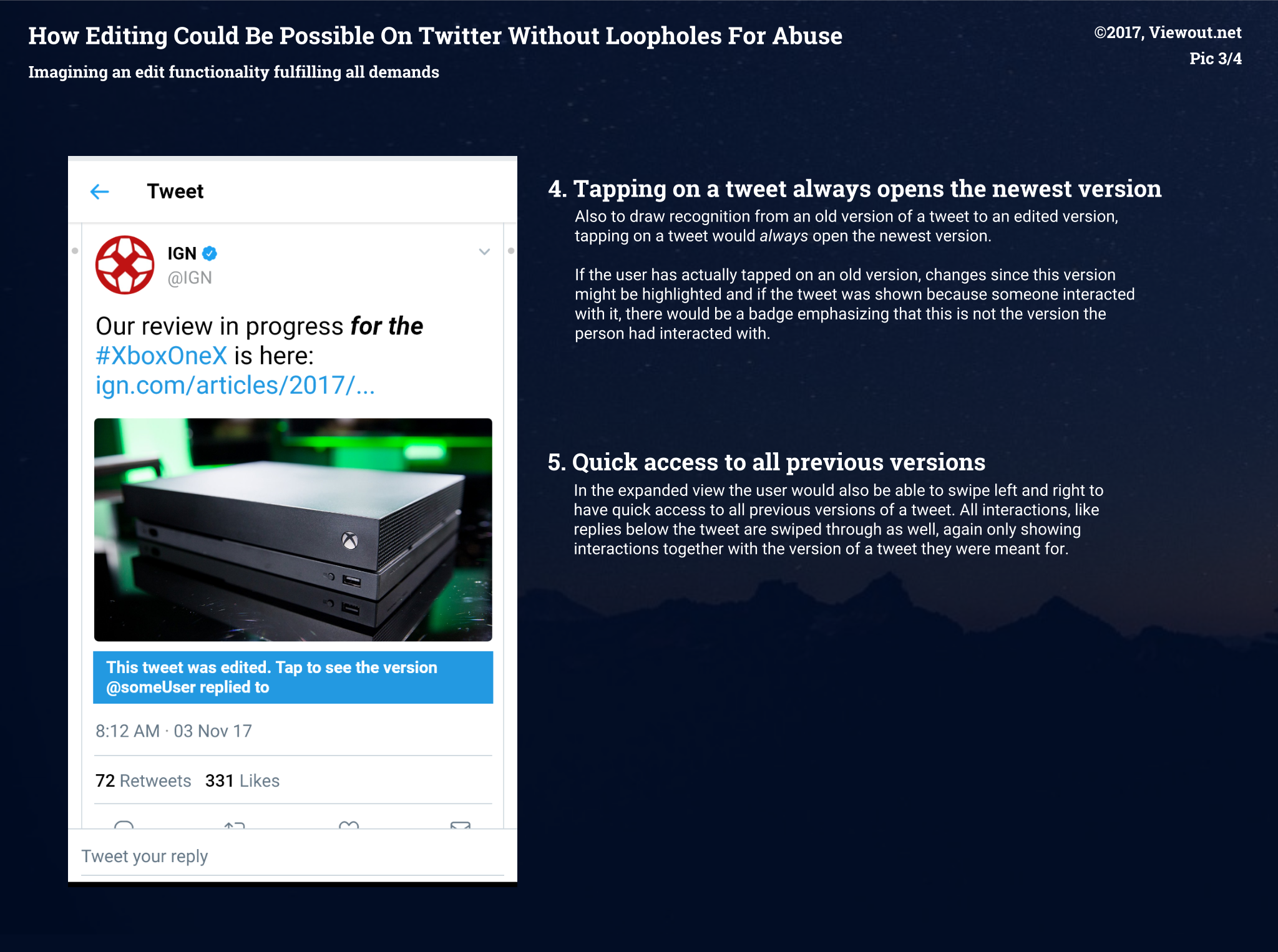 For an edited tweet to still have at least a bit of the attention of the original one though, first, there would be a visual clue in this concept that there’s a newer version of the tweet wherever it would show up. And the newer version could then always directly be reached by swiping left on the old tweet.

Notably, as an old tweet is only shown because someone else must’ve interacted with it before it was edited, this interaction would be swiped away as well, making it clear that the edited version does not have to do with the interaction that was meant for the older version.

Also this would only work when there’s a newer version. If it’s already the newest version of a tweet showing up in your timeline, which was edited before, you wouldn’t be able to swipe right to see the older versions directly there.

Second, opening a tweet would always open the very newest version of it, with changes from the version the user has actually tapped on being coarsely highlighted in the expanded tweet. Potentially the entire tweet being highlighted if it was edited extensively or completely changed.

From the expanded view of a tweet, the user would also always be able to swipe horizontally to quickly see all previous versions of it. Again here, too, all replies and other interaction stats would be swiped through as well, again never showing replies to versions of the tweet they were not meant for. It’s really important in this concept that also unconsciously users would be told what an interaction was made for and what later edits it didn’t have anything to do with.

Additionally, if the user taps on an old version of a tweet that was shared, liked or retweeted by someone else, there would be an additional badge in the expanded view also telling the user that the specific person from whose interaction he came from did it for another version of the tweet. 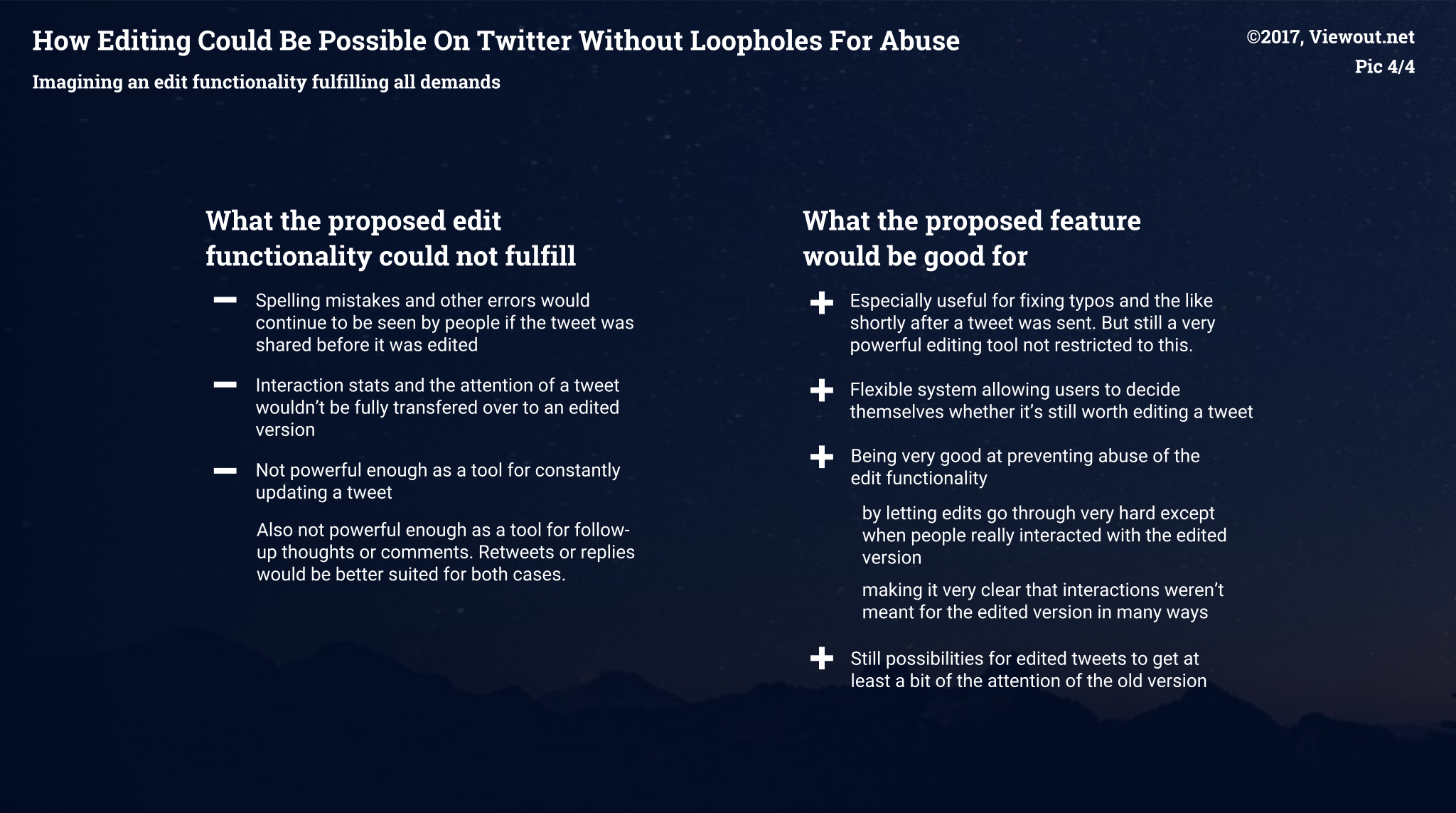 One aspect that’s not fully worked out in this concept is whether previous versions of the tweet could still be interacted with after it was edited. Of course people could interact with replies to it, which would still link to the old version. But seeing as people are also able to delete their own tweets, I don’t know why editing a tweet couldn’t also give them the power to no longer have others interact with the old one. But it’s not a point I have ultimately decided, as it would also be rather user-unfriendly for the viewers of the old version.

So to sum things up, I really think this edit feature would address many of the problems people see in edit functionalities on Twitter, while still allowing much more than time- or otherwise limited implementations.

The edit feature couldn’t really be used for anything else, like constantly updating a tweet, and it also wouldn’t be powerful enough as a tool for follow-up thoughts or comments. For both, retweets or replies to the own tweet would be better suited options.

But it would be very good for the very narrowly defined use case it was intended for: editing tweets. And being very powerful at that with a flexible system for users to decide themselves whether it’s worth it. And doing a good job at preventing every form of abuse of this functionality - by basically not letting an edit go through easily and making it very clear to users what belongs together in many ways.

The greatest problem I’d see with this implementation is the amount of work it’d require to be implemented by Twitter, thinking about the many many places it would affect and need to be made available to. And considering Twitter’s latest big change was increasing a character limit.

But if Twitter were to put really a lot of work into this, I think it clearly could be done. The aim was to show that it’s possible to create a robust, safe edit functionality and I think that my proposed feature would fulfill all these aspects - the only problems left with such an edit implementation would be nostalgic ones.

But what do you think? Do you agree that this imagined implementation would fulfill also the demands of more cautious users? Do you think editing would really be any bit a greater problem on Twitter than on other networks? What features are you hoping for to be added to Twitter?

Design Files
The app mock-ups in this concept were made with Adobe Experience Design. You can download a compilation containing recreations of the timeline, compose and expanded tweet interfaces of Twitter's Android app below:
Download TwitterAndroidAppUIRecreation_byViewoutNet.xd (1.9mb) 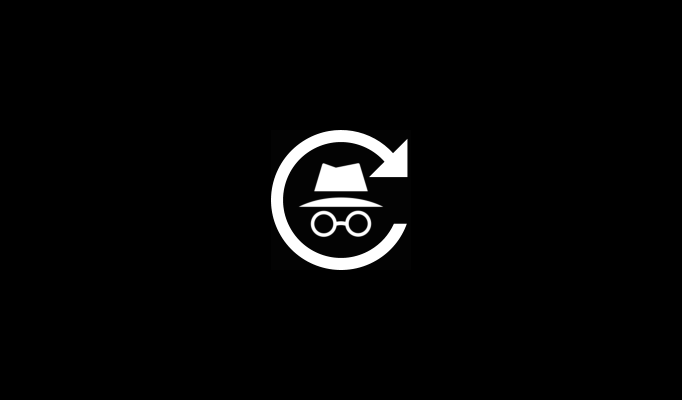 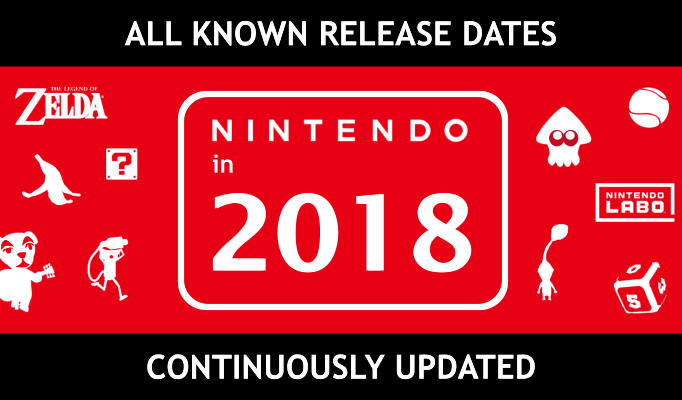 An edit functionality fulfilling all demands