“Mini conversations within your notifications” 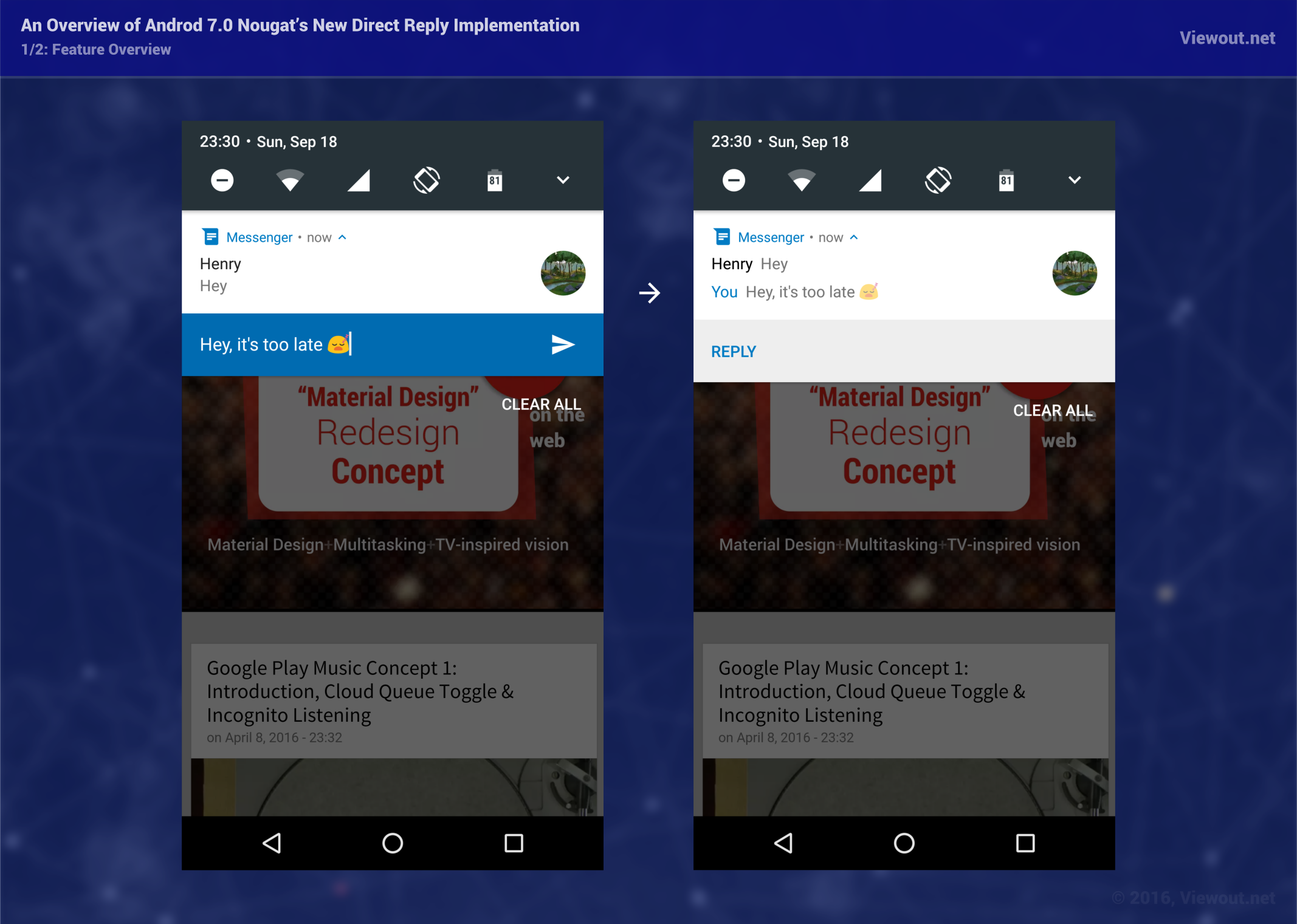 One of Android’s greatest key strengths has always been the way it handles notifications. Google’s mobile OS was the first to adopt and popularize this system of kind like passive app alerts piling up in something like a notification shade, and the Android team has advanced this functionality greatly with every new release.

It’s little surprise then to see Android Nougat again focusing a lot on that aspect, introducing things such as a new look for notifications, grouped notifications, new & more highlighted control options and a new direct reply implementation for messaging apps.

At first, all these updates might not sound like much and kind like like not needed updates and catch-up features. Actually, however, I’ve found that they’re a lot more significant than their names and first appearance might suggest, perhaps even displaying the greatest advancement to Android’s notifications since 2011’s introduction of actions and resizing, as they appear to be just the beginning of a deeper rethought of the system’s notification system.

Also, I think that they are all connected and were made with each other in mind. The new full-width design, for instance, appears to have been designed primarily also with the new grouped notifications feature in mind. And without the new design and grouped notifications, the direct reply functionality wouldn’t have been possible, as you would not have been able to answer to one specific contact only if several persons had written to you through the same service.

Understanding why the design has been changed or that grouped notifications actually have any deeper advantage already makes Android Nougat look like a more substantial update than at first. But what really makes me think of this as the biggest advancement to notifications since Jelly Bean is the way that the new direct reply functionality works.

Having seen it and it’s cool in-line text-box when answering messages in photos and videos already, I had a very clear idea of how direct reply would work upon using it. A very good-looking and probably well-thought implementation, but just a minor time saver after all, and similar quick reply functionality has now been existent for some time already on iOS, Windows Phone, and with own implementations even on Android, for example on WhatsApp.

And for most of the time, it also is just that kind of simple, good-working implementation that I had expected. But then, using it with an app that’s been fully adapted for this feature, like Google’s native SMS app Messenger, a completely other new functionality is revealed, as after sending such a quick reply, the notification for this chat won’t go away, but your just sent answer will be added to the end if it.

Put that simply, this might still not sound like much. But what Google has done here is creating a whole new home for all your active chats from all messaging services.

You can send more than just one answer directly or after some time and be right back in the context when the other person answers. You can swipe chats that you think won’t be answered anymore away, and with messages from all your different messaging apps one over another, you not only have kind like a meta-messaging app, but also a multitasking capability that’s interestingly more advanced than today’s messaging apps one-chat-at-a-time-only interfaces.

Messaging is a very core part how we use smartphones today, repeatedly opening, closing and switching between the same messaging apps for new messages. So having a meta messaging app in the notification shade just one pull-down away from whatever screen you’re currently on is a huge step forward. It’s kind like a level of experience that I’d expect if a messenger company like WhatsApp or again Facebook tried to design their own operating system (or rather better as this implementation is very platform-agnostic). 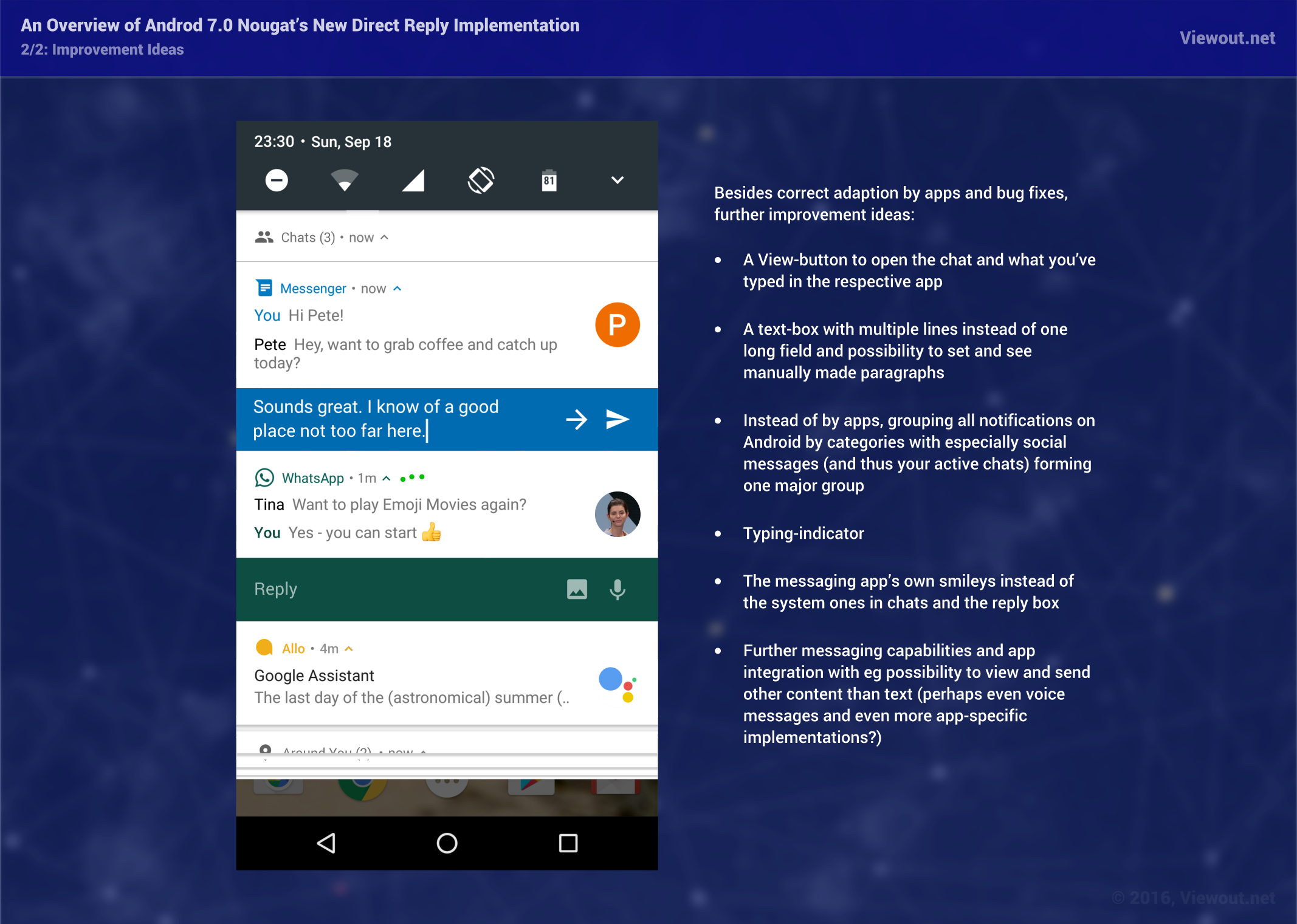 Nevertheless, the implementation is of course far from perfect in its current state.

First, the feature needs to receive lots of adaption from app developers. Of several apps I’ve tested, only Google Messenger correctly added your answers to the end and didn’t close the notification (I’ve looked it up, this is indeed the correct behaviour!). Moreover, the feature even breaks the notifications of some unadapted apps. WhatsApp, for instance, now only shows the last of several new messages and only lets you expand texts if you haven’t received more than one message.

Secondly, along with many bug fixes, there are a couple of obvious little features missing that should better be added with a small update in the near future, such as a view-button to show your typed message in the messaging app, or that the text-box should have paragraphs and make manual ones also visible in the notification.

Thirdly, the experience appears to be not fully carried out. Notifications currently disappear if you open (and in some cases then leave) the applications, and the last few previous messages are only visible if you haven’t opened the app in the meantime. It would be better if this feature was fully embraced, with the relevant chats for example really only going away if the user swipes them away, and the last couple of relevant messages always shown (even though that could mean again even more adaption work for developers).

Beyond those more concrete aspects, Google could improve the feature’s messaging capabilities in several ways in future updates, introducing for example an indicator when the other person is writing, or allowing for other content than text to be sent and interacted with. The feature could also show and work with the messaging apps own emoticons instead of the system ones. Too much personalisation from apps in the notifications, as well as focusing on introducing too many sub-features to the implementation could both hinder the experience, making things too complicated, mixed up or potentially losing what makes it basically that good.

Besides more integration, a point that I’m more certain about is that instead of grouping notifications by apps, Android should group them into categories, especially also making one big group for messaging apps. All your active conversations from all services in one place and with the last active chats at top, this would really fulfill the idea of a meta* chat place.

Coincidentally, iOS 10 also features much-reworked notifications and even a similar implementation that when answering a message shows a few previous messages. However, having made a bit of research, I’ve found that this implementation is not comparable to Android Nougat’s new implementation and experience described in this article, as on iOS message notifications will still go away after answering, and with the whole reply interface not being in-line, but only visible on top of everything else when interacted with it, it’s not anyhow going after a similar multitasking or meta-chat experience.

With all article’s I’ve read about Android Nougat and all reviews of the OS update seemingly completely missing and ignoring that feature, I’ve really been sceptical for a very long time whether this was really the correct behaviour or whether I had written so much text and put so much effort on nothing but just a simple bug.

However, not only the developer page states that answers from the user should be stacked into the same notification, but also Google’s press material hints at this feature with the sentence “Mini-chats within your notifications” and, most reassuringly, there’s an animation showing that exact behaviour on the official Android Nougat website in the US.

It’s really kinda sad to see this feature being so overseen, as I think it’s really a very big part of Nougat after all and because of the level of thought that probably went into it and what all I can imagine this leading to, it’s probably also my favorite new feature of Android Nougat.

I sincerely hope that Google will correct the few minor bugs and missing small features of direct replies soon, and that instead of perhaps even yielding to the public confusion and making it act more reasonably, greatly improve and build upon it in future Android versions, hopefully with a few of the ideas listed in this article.

What do you think? Do you already have Android Nougat and could I convince you that this is really not a bug (well, I’m still not entirely sure myself :D)? Do you think these mini-conversations are really as significant as put in this article? What are your improvement ideas and what do you think about the ones discussed in the article? 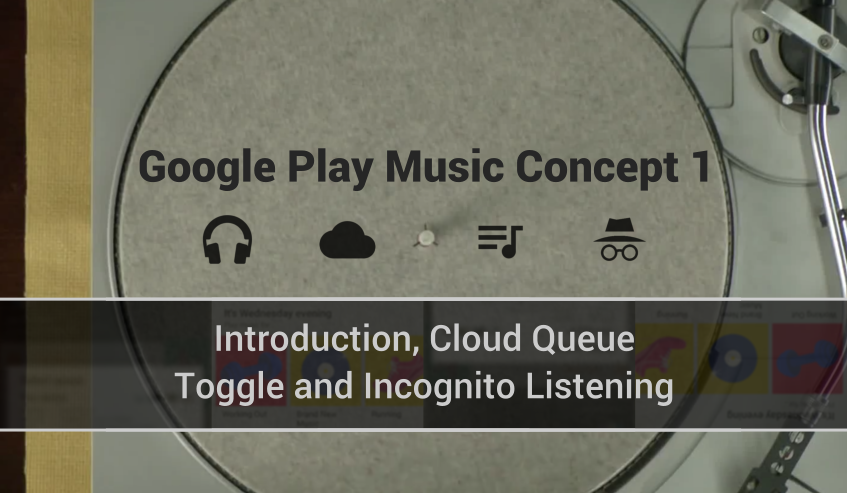 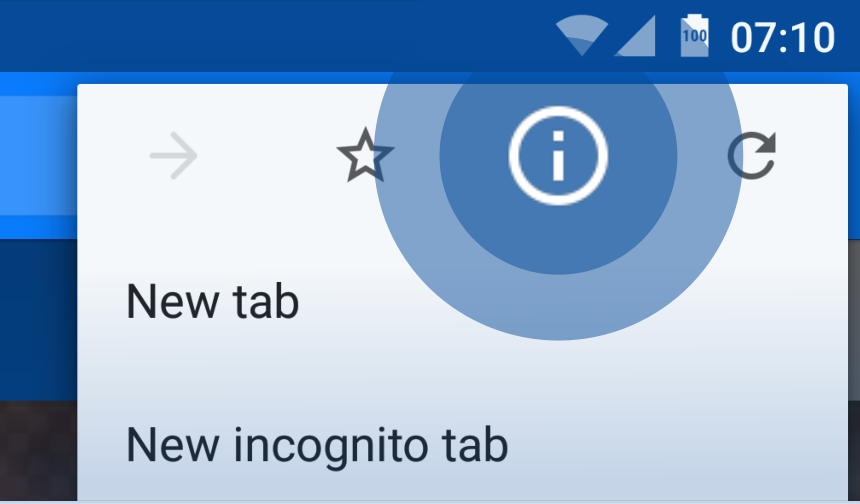 “Mini conversations within your notifications”